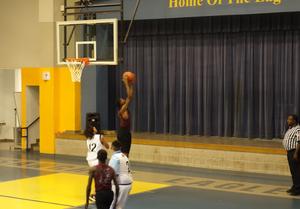 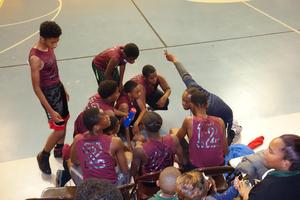 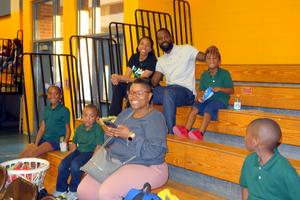 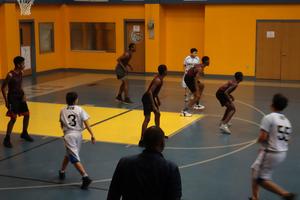 In Varnett's first-ever competition in a charter school league, the Southeast campus middle school basketball team beat the Sanchez Charter School squad 39-16 on the school's home floor Monday evening.
The Southeast Tigers dominated the boards and played solid defense to cruise to victory as Varnett parents and staff cheered from the stands. Among those in attendance were Mr. Lonnie Reynolds, Varnett's athletic director; Ms. Jessika Hearne, Southeast campus director and Mr. Jesse Arps, Southwest campus director.
The teams played six-minute quarters. The game was tied 6-6 after the first quarter and Varnett led at the half 23-9. From then on, it was a cakewalk for the team coached by Mr. Kendrick Donahoe. The Tigers used their superior size to get second and third shots at the rim. Eighth-grader Zion Jones was dominant with 22 points, outscoring the entire Sanchez team.
Watch the closing seconds of Varnett Southeast's basketball victory
Click here for more photos including the stat sheet
Listen to Coach Donahoe's post-game interview
Through the efforts of Mr. Reynolds and the support of Dr. Margaret Stroud, the district's superintendent, The Varnett Public School joined the Texas Charter School Academic and Athletic League earlier this year.
The league works to aid the individual growth of Texas’ charter school students, through academic and athletic competition, to promote teamwork, a healthy lifestyle, and the constant pursuit for academic excellence, according to the organization's website.
Varnett Southeast's next game is on Thursday against the Huntsville Classical Academy in Huntsville.
Here's the team's entire schedule. (Scroll to the right for the locations.)
Congratulations to the Southeast Tigers for their emphatic basketball victory!
Published December 3, 2019 Print