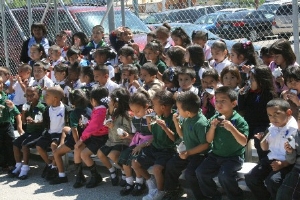 Ice cream, balloons, music and happy students added up to lots of fun as the East Campus today celebrated its designation as a 2010 national Blue Ribbon School.
Blue Bell Creameries handed out more than 400 ice cream sandwiches to students, parents and staff as an acknowledgment of the high-performing state charter school and its Blue Ribbon status.
Twilet Alexander, campus director during the 2009-10 school year, led a rally that had students jumping and shouting during the playground festivities.
"We are eating ice cream because we are a Blue Ribbon School," Mrs. Alexander exclaimed, encouraging chants from the crowd.
Pre-kindergarten through second grade students received their ice cream first before they gathered onto the bleachers. Third- through fifth-graders followed about a half hour later. Each rally ended with the release of balloons.
"Blue Bell likes to recognize excellence in education," said Blue Bell sales manager Daniel Martin.
The East Campus, under the leadership of Mrs. Alexander, earned the prestigious award for its high performing students and for being ranked among the top 10 percent of schools in Texas as measured by its performance on state assessments. The award was issued by the U.S. Department of Education.
An open enrollment elementary school, Varnett was among 254 public and 50 private schools to earn the national recognition and the only state charter school to win the award. The schools will be honored at an awards ceremony Nov. 15-16 in Washington, D.C.
After the festivities, and after the students started filing back into the classrooms, one student was overheard to say:
"We want more parties! We want more ice cream!"
Click here for photo gallery

See photo No. 1 at chron.com