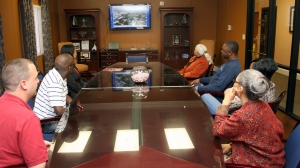 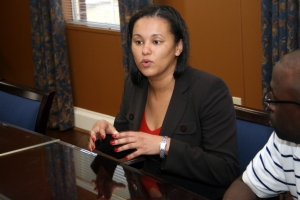 A representative from  the Smithsonian Institution recently met with Superintendent M. Annette Cluff and administrative staff members to promote the planned National Museum of African American History and Culture in Washington, D.C.
Construction for the $500 million, 350,000 square-foot museum begins next year and is expected to open in 2015, said Anna R. Barber, central major gifts officer for the institution. The museum will located on the National Mall adjacent to the Washington Monument.
"The museum will bridge a major gap in our national memory by creating exhibitions and programs focusing on a wide arc of history - slavery, Reconstruction, the Harlem Renaissance, the Great Migrations to the North and West, the Civil Rights movement and beyond," according to a Smithsonian Institution release. "It will celebrate African American creativity and cultural expressions through art, dance, theater and literature."
Ms. Barber said that Former First Lady Laura Bush will sit on the museum board and represent Texas in the promotion of the facility.
Click here for photos