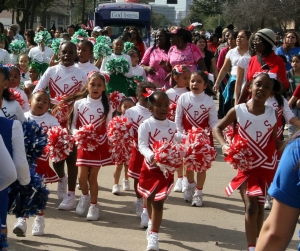 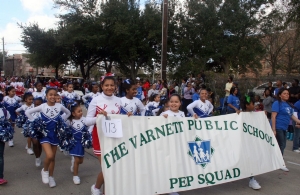 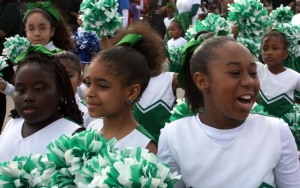 Hundreds of people lined the streets as 94 Varnett cheerleaders and “stompers” marched in Mid-Town during the 18th Annual MLK Grande Parade.
The parade on Monday featured 11 professionally designed floats, 22 marching bands and about 150 performing groups as they marched and waved at the crowd in perfect weather conditions. Varnett was well represented by pre-k through fifth-grade students and parent volunteers during the event to honor slain civil rights leader Dr. Martin Luther King, Jr., who would have turned 83 on January 15. The parade started at 10 a.m. and the Varnett students completed the one-mile route shortly after 11:30 a.m. They were the 113th entry in the event.
Ms. Anna Medina, the East Campus nurse who organized Varnett’s participation in the parade, said she was pleased with the outcome. “The kids are still talking about it,” Ms. Medina said Tuesday afternoon. “Of course, the parents were excited to see their children in a big Houston parade. It was very exciting.”
Northeast Campus weighed in with 35 cheerleaders, East with 32 and Southwest with 19 cheerleaders and eight "stompers" after meeting at a check-in point at Houston Community College Central Campus. The wait was long, but worth it. “It was fun and I experienced a lot of new things,” said Lamaiya McInnis, a fifth grader at East Campus. “I’ve never marched in a parade before. It was great and I saw a lot of people cheering for us.”
Parents join the fun
Lots of parents were on hand, snapping pictures, waving and even marching alongside their children. “Parent support was outstanding,” said Southwest Campus director Twilet Alexander. “I can’t believe how many parents supported our first time participating in an MLK parade.”
Ms. Medina said she thought it would be great to involve the students in a significant extracurricular activity and later contacted the parade organizers in October. She sent pictures of the students and a blurb about the school. To her delight, Varnett was invited. “We wanted to boost school spirit and build confidence within these girls,” Ms. Medina said, expressing a vision that Varnett would some day take part in an even larger parade on Thanksgiving.

East Campus director Gayle Voltz said the parade was a learning experience for the students. “They were part of a grand tribute to Dr. Martin Luther King’s legacy,” Ms. Voltz said. “They marched proudly.” Added Northeast Campus director Yolonda Brown: “For being the first time, they did an excellent job,” she said. “They practiced hard and were very excited.”
“It was a good turnout and everybody was happy,” said Melissa Cluff, district director of pre-k.
But with all the excitement, the students did not lose sight of the significance of the event. “We were honoring Martin Luther King because it was his birthday,” said Jacqueline Saucedo, an East Campus 4th grader.