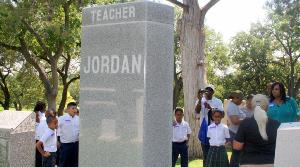 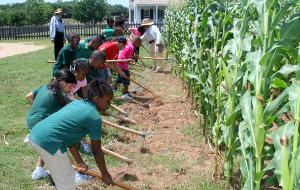 While a group of 5th graders bused nearly 1,500 miles to Washington, D.C. and back, 18 third-graders and their chaperones took a tour much closer to home: Johnson City, Washington and Austin, Texas.

The students toured the boyhood home of the late President Lyndon B. Johnson and visited the Lyndon B. Johnson National Historic Park, which tells the story of the nation’s 36th president beginning with his ancestors until his final resting place on his ranch.

They also visited what is known as the Texas White House, the center of political activity for more than 20 years while Johnson was president. After Johnson’s death in 1973, his wife – Lady Bird Johnson – continued to live at the ranch part time until her death in 2007, according to the National Park Service website. Behind the Texas White House is a hangar and airstrip, which the Johnsons had constructed soon after buying the ranch.

Students also visited the State Capitol and the offices of state Reps. Sylvester Turner and Harold Dutton, both of Houston. They learned about Texas stalwart U.S. Rep. Barbara Jordan and visited her grave site at the Texas State Cemetery in Austin. Ms. Jordan, the first black woman from a Southern state to serve in Congress, is the only African American person buried at the cemetery.

The third-graders concluded their three-day trip with a tour of the Bob Bullock Texas State History Museum in Austin and a visit to the Washington on the Brazos, which is known as the “Birthplace of Texas.”