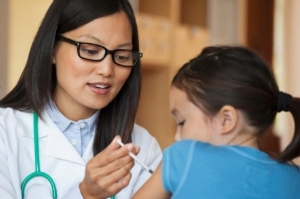 Measles outbreak a reminder of risks
A state health alert for a measles outbreak shortly before the start of school serves as a reminder that students must be current on their immunizations, Nurse Allen said.
Of the 16 Texas cases, 15 are in Tarrant, Dallas and Denton counties and one was in Harris County, compared to zero in 2012 ans six in 2011, according to the Texas Department of State Health Services. The Harris County measles case happened in April in north Harris County to a one-year-old baby. The child's exposure to measles was associated with international travel, according to a report on KTRK-TV, Channel 13.
“I very strongly encourage to parents the necessity of their children being current for their own health as well as the health of other children,” Ms. Allen said. She said she takes an aggressive approach of meeting parents “when they come to the door” to ask them about their children’s immunization records.


Ms. Allen cautioned that there’s no need for panic. However, she urged all children who have not been vaccinated against this highly contagious illness to do so before the start of school on Monday, August 26.


Measles can be prevented by the combination MMR (measles, mumps, and rubella) vaccine, according to the Centers for Disease Control and Prevention.  The first dose is typically recommended at 12 months old and the second dose at 4 years old, Ms. Allen said.

Nearly 92 percent of Texans have received MMR vaccinations, putting Texas at a higher rate than 30 states.


Measles is a highly contagious respiratory illness spread by contact with an infected person through coughing and sneezing.  It is so contagious that if one person has it, 90 percent of the people close to that person who are not immune or vaccinated will also become infected with the measles virus, according to DSHS.


Ms. Allen said the district’s nurses have access to ImmTrac,  a free, secure and confidential registry in Texas.  ImmTrac  safely consolidates and stores immunization information electronically in one centralized system. Texas law requires written consent for ImmTrac  participation and limits access to the Registry to only those individuals who have been authorized by law. ImmTrac contains several million immunization records and continues to rapidly grow with increase participation, DSHS says.
Published August 22, 2013 Print