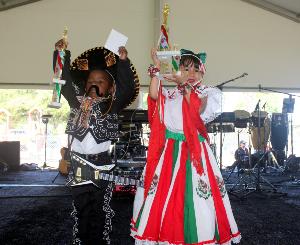 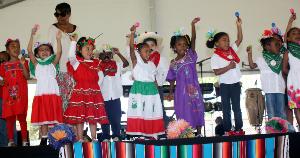 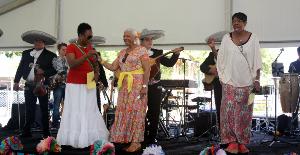 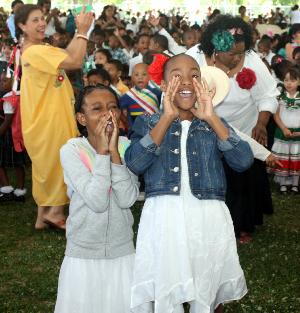 More than 2,000 students, parents and staff celebrated Cinco de Mayo at the Southwest Campus May 5, not to be confused with another historic event, Mexico's Independence Day.

Also known as the Anniversary of the Battle of Puebla, Cinco de Mayo is in honor of Mexico’s military victory in 1862 over the French forces of Napolean III.

While everybody may not know the difference  (Mexico’s Independence Day is celebrated on September 16), Cinco de Mayo nevertheless is a day of Mexican style decorations, libations, music, food and dancing. In the United States, Cinco de Mayo also is meant to celebrate Mexican heritage and pride.

People came out in force for the annual festivities and gathered under a giant tent while listening to the sounds of Mariachi Origen Y Tradicion  and Mango Punch. They also witnessed the crowning of the school district’s Mr. and Ms. Cinco de Mayo – Da’Sayy Waller from Southwest PreK and Sky Orozco, a Southwest kindergarten student. Each was presented a trophy and a gift card for the first-ever Mr. and Ms. Cinco de Mayo event, where Da'Sayy and Sky were chosen among candidates from each campus, including Southwest PreK. They were judged on the basis of their Mexican attire.

“This was the best Cinco de Mayo we’ve ever had,” said Ms. Lopez, a key organizer of the event from the Northeast Campus. “The kids were so excited and everybody pitched in.”

The ceremony began with the Pledge of Allegiance to the U.S. and Texas flags and a welcoming speech from Dr. M. Annette Cluff, Varnett’s superintendent.

The presentations on stage included:

*East Campus – “Come to the Puebla” by Norma Diaz

“Cinco de Mayo is a fun festive holiday to celebrate with music and dancing and we did a lot of dancing,” said Ms. Medina, the Northeast Campus nurse.

“Although it is very important to know the reason we celebrate, Varnett put on an amazing festival and really showed how to celebrate Cinco de Mayo with pride! "

Added East Campus Director Gayle Voltz: "The Cinco de Mayo program was an opportunity for people from different cultures to celebrate this event through dancing, singing and eating."