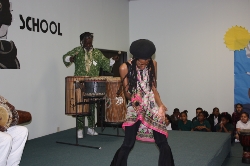 The East Campus served as the venue for students districtwide as they took a break from their regular curriculum and interacted with the performers.

Jomo's Drum-Talk, a story-telling performance group, dazzled about 300 students with percussion and dance during its February appearance. The participants - Justice Craft, Ashlei Mayadia and the man who called himself simply Jomo – also used costumes to tell the story about how drums came to be. Later, the students got involved in an interactive, rhythmic jam session.

Mollie J. Stevenson, inducted into the National Cowgirl Hall of Fame in Fort Worth in 2001, visited Varnett and impressed students with her display of the black ranching tradition. She was joined by Cowboy Joe, who gave a "branding" demonstration, and Gloria Brown, an expert on Mexican style, culture and dance. Evelyn Hollins also assisted. Ms. Stevenson founded the American Cowboy Museum on her family’s Texas ranch to highlight the role of blacks, Hispanics, Native Americans and women in the West.

Varnett students also were treated to a visual tale of a family's journey to freedom along the Underground Railroad through Texas to Mexico. An ensemble entertained pre-kindergarten and kindergarten students on Monday, Feb. 15, and 1st and 2nd graders on Tuesday, Feb. 16. The actors in the Children's Express Theatre presentation were Clarence Whitmore, Jr., Michael Washington, Clay Ratcliff and Nicholas Lewis. Alex Gardner was the stage manager who provided the music.

Wayne DeHart, a mainstay in the Houston Theatre scene for more than 25 years, conducted a re-enactment of a Buffalo Soldier as he told "A Soldier's Story." Dressed in military uniform, DeHart appeared before third- through fifth-graders district-wide at the East campus.

Meanwhile, dozens of Varnett students visited the African-American Museum where they learned the history the Buffalo Solider. The event took place on Feb. 1, the first day of Black History Month.
Published February 24, 2010