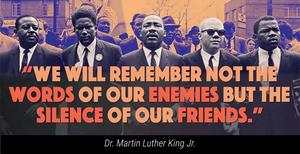 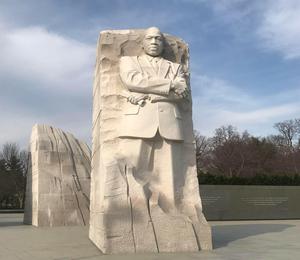 Any number of historic moments in the civil-rights struggle have been used to identify Dr. Martin Luther King, Jr. — prime mover of the Montgomery bus boycott, keynote speaker at the March on Washington, youngest Nobel Peace Prize laureate. But in retrospect, single events are less important than the fact that King, and his policy of nonviolent protest, was the dominant force in the civil-rights movement during its decade of greatest achievement, from 1957 to 1968.
King was born Michael Luther King in Atlanta on Jan. 15, 1929 — one of the three children of Martin Luther King Sr., pastor of Ebenezer Baptist Church, and Alberta (Williams) King, a former schoolteacher. (He was renamed "Martin" when he was about 6 years old.)

After going to local grammar and high schools, King enrolled in Morehouse College in Atlanta in 1944. He wasn't planning to enter the ministry, but then he met Dr. Benjamin Mays, a scholar whose manner and bearing convinced him that a religious career could be intellectually satisfying as well. After receiving his bachelor's degree in 1948, King attended Crozer Theological Seminary in Chester, Pa., winning the Plafker Award as the outstanding student of the graduating class, and the J. Lewis Crozer Fellowship as well. King completed the coursework for his doctorate in 1953, and was granted the degree two years later upon completion of his dissertation.