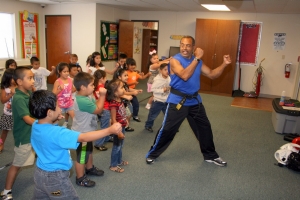 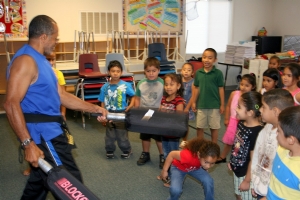 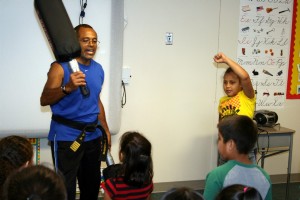 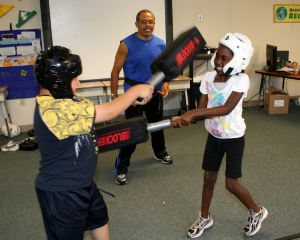 Students hit and miss during weekly sessions
“Winners never quit!”
“Quitters never win!”
That’s the call –and-response curtain raiser as instructor Philip Plumber begins karate lessons for his young enthusiastic students.
The weekly summer school classes for special education and English as a Second Language students aren’t about aggression, bullying or intimidation. “This is about respect, discipline, self-control, self-esteem and self-defense,” said Plumber, a martial arts expert who has been teaching karate to Varnett students for 10 years and has been self-employed for 20 years.
Plumber, 61, is a veteran of the U.S. Navy where he started his martial arts training in 1970 on board the USS Coral Sea aircraft carrier during the Vietnam War, according to his website. Now, the main focus of this Master Black Belt specialist is to teach pre-kindergarten to elementary students the martial arts, karate, taekwondo, physical fitness and self-defense. Plumber is an instructor at Texas Southern University where he received his master's of science in human performance.
On Wednesday, June 29, Plumber spent time at the Northeast Campus with five special education students, and then conducted another hour-long session with about 25 ESL students.
He started the students off with stretching exercises and as he shouted instructions, the students ended each response with an emphatic “sir.” His main message was “You are all winners; there are no losers.”
Students later assumed the fighting stance, with hands up, and started kicking, punching and ducking exercises. Suddenly, he saw something he didn’t like. “Get your hands out of your pocket,” he told one student. “If your hands are in your pocket, they do you no good.”
Plumber patiently demonstrated his techniques, working with them one-on-one before the students face off against each other. Using a padded training blocker, students earned three points for a blow to the head, two points to body and one point to the legs. And, of course, defense was highly emphasized.
“You’re learning how to compete,” Plumber told the students. “You compete for jobs, you compete for everything.”
Plumber, who has placed no lower than second place in major martial arts tournaments, said he is teaching the students to bolster their confidence, concentration and motor skills.
“I’m teaching the art of not fighting but they also need to fight so they can make choices,” he said. “They learn how to get away from attacks. I always tell them to run first but striking back is a last resort.”
Natalie Ramos, who becomes a 4th-grader next school year, said she enjoys the sessions. “I’m learning about kicking and stretching and defending myself,” she said.
Suyapa Gomez, ESL teacher at East Campus, said she also sees value in the karate lessons.
“The students learn how to follow directions and the training provides structure for them.” The idea is not to encourage students to fight, she said, but to defend themselves.
During his training, Plumber preaches more than just the physical part of the training. “If you listen to your teachers, you do better,” he said. “They know more than you do.”