Varnett says "thank you" with Christmas meals for families 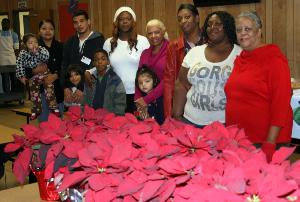 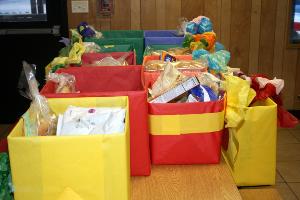 Varnett staff handed out 80 Christmas dinners to families as a show of appreciation for parents who chose Varnett for their children’s education.
Students played a part in the holiday giving by writing a short essay about why they, or the family they were nominating, should receive the Christmas baskets. A panel of judges chose the most compelling essays and those families were given Christmas dinner with all the trimmings.
Southwest Campus was to hand out 30 dinners; Northeast Campus, 29,  and East Campus, 21. “Through our community service projects, we have given to other families but then we asked ourselves ‘What about ours?’” said Twilet Alexander, Southwest Campus director who spear-headed the project.
She said the original plan was to distribute eight Christmas dinners, but Dr. M. Annette Cluff, the district’s superintendent, increased it to 80.
Dr. Cluff helped give the dinners to families at the Southwest Campus, and parents showed their appreciation as they received them.
Second-grade student Jasmin Flores came with her father to pick up a basket and she explained the theme of her essay. “I said I was doing what I was supposed to do, listening to the teacher,” Jasmin said.  Her father added: “She came home and said  ‘Daddy, I want to enter this contest.’ She didn’t ask for any help at all.”
Winold V. Brown, the grandmother of first-grader Elijah Brown, also picked up a basket. She said Elijah, who lives with her, wrote in his essay that he wanted a basket for his mother and grandfather. “He wanted to make them happy, that’s what he said,” Ms. Brown stated.  “He wrote it and I gave him guidance. He knew we were going to a friend’s house for Christmas but wanted something special for them.”
Click here for photos