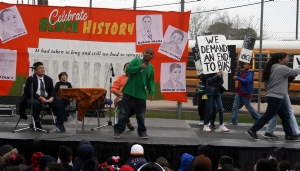 Black History Month celebration
Varnett students on Feb. 20 paid tribute to the Civil Rights Movement and honored some of the  iconic leaders of that era.  The Black History Month event  cast light on the dreams of Malcolm X, Medgar Evers and Dr. Martin Luther King Jr. Some of those dreams turned into reality, such as the two-time election of Barack Obama as president of the United States.
Nelson Mandela also was honored, giving the theme of events an “MMMM” banner, Medgar, Malcolm, Martin and Mandela. Though the students did not live during  the Civil Rights movement  of the 1950s and 1960s, they nevertheless learned about the struggle for desegregation, the right to vote, fair housing and employment opportunities. Those declarations were written on signs posted throughout the playing field at the Southwest Campus.
It was clear that students worked hard to read up on the civil rights leaders, perform song and recite speeches in front of more than 1,800 students and parents from Varnett’s three campuses. Southwest PreK students performed to the famous words “Ain’t Gonna Let Nobody Turn Me Around.” Northeast Campus students danced to “This Little Light of Mine,” while East Campus students performed a skit entitled  “What’s Happening Now That We Are Trying to Come Up" by campus director Gayle Voltz.
Black History Month originated in 1926 by historian Carter G. Woodson as Negro History Week, celebrated on the second week of February. The week was chosen because it marked the birthdays of both President Lincoln and abolitionist icon Frederick Douglass. President Gerald Ford officially recognized Black History Month in 1976, calling upon the public to "seize the opportunity to honor the too-often neglected accomplishments of black Americans in every area of endeavor throughout our history."
Click here for photos
Published February 22, 2013 Print