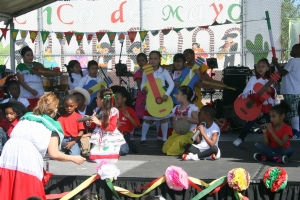 About 1,800 students, parents and staff braved some cool weather to celebrate  Cinco de Mayo in a show of cultural diversity that characterizes  The Varnett  Public School. The event at the Southwest Campus playfield was held on Friday, May 3, because the date of the actual observance was on Sunday.
Those in attendance were treated to seven presentations from various grade groups, many dressed in Hispanic attire. Yelba and Latin Fire heated up the stage with live music and later invited students to step up and dance.
Dr. M. Annette Cluff. Varnett’s superintendent, delivered brief welcoming remarks while students Elias Aguirre, Miquel Venegas and Daeja Davidson delivered a brief introduction of the history of Cinco de Mayo in both English and Spanish.
Cinco de Mayo marks the Battle of Puebla on May 5, 1862, when Mexican troops defeated a French army of Napoleon III, then considered the mightiest military in the world.
Click here for photos