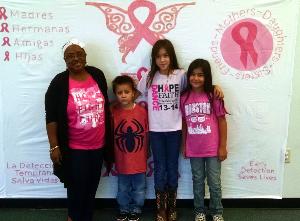 Ms. Voltz tells her story
Our campus recently recognized October as National Breast Cancer Awareness Month.  Students and staff dressed in pink to support an important cause that is close to my heart. Our main focus was to wear pink for “Pink Out” day and release pink balloons in support of regular testing for women and men.
I felt an emotional release as the balloons floated away because I am a breast cancer survivor. One in eight women will be diagnosed with breast cancer in their lifetime. It was March of 2013 when I became one out of the eight. The news was devastating to me and my family. I thought I was being proactive when I scheduled a routine visit to get a mammogram during spring break. The next day I was told I needed a biopsy and an ultrasound test. A week later my doctor called me in to tell me I had Stage 1 breast cancer and discussed what would be my next step. I was a referral to M.D. Anderson.
I had surgery in April 2013 to remove the cancer and some of the lymph nodes under my arm. After recovering from surgery I received radiation treatment for eight weeks. I am very thankful for the many prayers, a supporting family and a great team of doctors. During the whole process I realized a positive attitude was a major key in surviving breast cancer.
I spoke to our students about how testing and early detection saves lives. You don’t have to have breast cancer in your family to be affected. My mother and my grandmother never had cancer. That is why it is so important for women and men to get tested on a regular basis. A small percentage of men will be affected by breast cancer and the percentage is growing. As I shared my ordeal with staff, I found out there are so many people directly and indirectly associated with breast cancer. Some have lost loved ones to cancer or they have family members battling breast cancer. I encouraged them to get tested because not knowing cannot save lives.
Our wearing pink and releasing pink balloons into the sky are not a onetime events. October signifies a chance to encourage everyone in the community to be pro-active, get tested and save a life. I am a one-year cancer survivor because I got tested early
You can go online to find other proactive ways to prevent cancer, which includes healthy eating habits and participating in a regular exercise program.
Ms. Voltz is East Campus director
Photo: Ms. Voltz (left) with her students
Click here for more photos
Click here for related story
"Like" us on Facebook!
Published October 21, 2014 Print