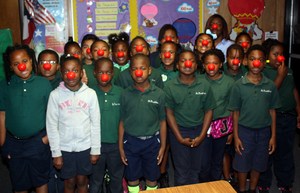 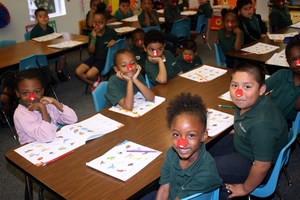 Red Nose Day hits the United States
Varnett students walked around today with something red on their noses.

Those were stickers that teachers bought their students to show support for Red Nose Day, a fun-filled campaign dedicated to raising money for children and young people living in poverty. “The benefits help children receive a better education and living conditions,” said Ms. Powell, a third-grade teacher at the Southwest Campus.

One way some teachers helped out was to buy a Red Nose at Walgreens for $1, half of which was dedicated to the Red Nose Day fund. In addition, Red Nose Day organizers have teamed up with NBC for a three-hour entertainment TV special featuring superstar actors, comedians and musicians. The event airs at 7 p.m. today Houston time.

Thirty years ago, screenwriter-director Richard Curtis suspected two things: People like to laugh and they like to do good. Red Nose Day has annually proved him right in the United Kingdom, where more than $1 billion has been raised to fight childhood poverty, according to a report by The Associated Press.

The hope is that Red Nose Day will become an annual event for the network and for U.S. viewers, just as it has long been a tradition for the BBC and Brits.