It’s never too early to starting thinking about a career, professionals tell students 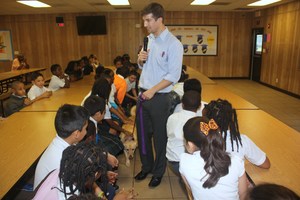 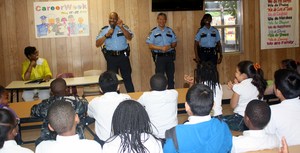 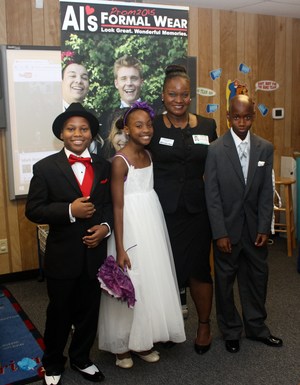 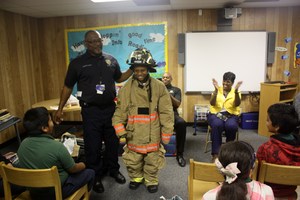 Working people who came to Varnett during Career Week all delivered the same message: stay in school and get a good education.

Students from the Southwest Campus heard from police officers, a veterinarian, beautician, banker, former firefighter and even the superintendent of Varnett Public Schools about their jobs, their passion and achieving their dreams.

“You have to get your education,” said Dr. Margaret Stroud, the superintendent, told a group of students in the Southwest Campus cafeteria. “But at first you have to set a goal. Never, never give up on your goal.”

Third-grader Justin Castro said he understands perfectly what it will take to achieve his goal of becoming a paleontologist, a person who researches fossil remains to understand the different aspects of extinct and living organisms. Justin became interested in the field after watching dinosaur movies before becoming a viewer of Animal Planet.

“If you want to be a lawyer or a chef, you need to get an education,” Justin said in an interview. “You have to read because (employers) might give you a test to see if you’re qualified.”

Ms. Winters, an interventionist at the Southwest Campus, was the point person who helped set up the weeklong Career Week schedule (May 18-24). Ms. Jackson, the librarian, also worked on the project. Among the invitees were a manager of Red Lobster Seafood Restaurants, a dentist, minister, teachers, a fashion designer, engineer, architect and others.

In addition to emphasizing the importance of a good education, Ms. Winters said she wanted students not to give up if they fall short of earning a college degree. According to CareerCast, there are good jobs that don’t require a degree.

“The information technology field is offering many tech-savvy high school grads a very promising future,” it says on the CareerCast website. “ Web developers are in high demand, for example, and job seekers are gravitating to the field each year even without a specialized degree. In fact, web developer tops our list of the best careers that don't require a four-year degree, according to the 2013 Jobs Rated report.”

The speakers were entertaining and encouraging.  Alex Betzen, who works at Westbury Animal Hospital, next door to the Southwest Campus, talked about his educational background and the work he had to put in to become a veterinarian. He even showed off his dog, Hank, a lab mix, which captured the attention of the second and third grade students in attendance.

“The students get to hear from more than teachers,” Ms. Winters said of Career Week. “They get to listen to a real person and it gets them excited.” She said she hopes to host Career Week every year at Varnett. “If you do this every year, it will make a difference,” she said.

Among the guests was Mr. Clarence White, III, a banker and a member of the Varnett Public School board of directors