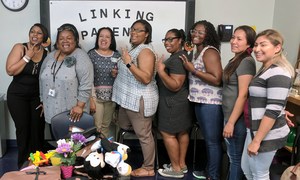 Parents and staff recently formed two teams and embarked on a scavenger hunt at The Varnett School Southwest and Early Childhood campuses, capping the ninth in a series of parent engagement activities for the school year.

The four-member teams were given clues and maps to find certain pages from the district  Parent Handbook that contained topics such as teamwork, student attendance and bullying. The teams also were tasked with taking a picture of Dr. Margaret Stroud, superintendent of The Varnett Public School, in the district's Administration Building.

The name of the parent involvement session was “The Power of Exposure.”

“We wanted the parents to re-emphasize the importance of the Parent Handbook, which contains pertinent information about school district policies as they relate to academics and attendance,” said Ms. Pamella Thomas, parent liaison for both campuses.

During the hunt, the participants had a chance to visit the classrooms of unsuspecting students, who looked on with puzzlement and amusement. The teachers, whose classrooms contained the clues, had been expecting the visitors.

The teams that uncovered the page on bullying were to asked to place the page on an anti-bullying sign on the campuses. That task was one of several exercises completed by the teams.

Dr. Mack Hines, a consultant, thanked the parents for the success of all of the sessions held throughout the district.

“We want to build from our success and continue promoting parent and family involvement for next year and the years to come,” Ms. Thomas said.